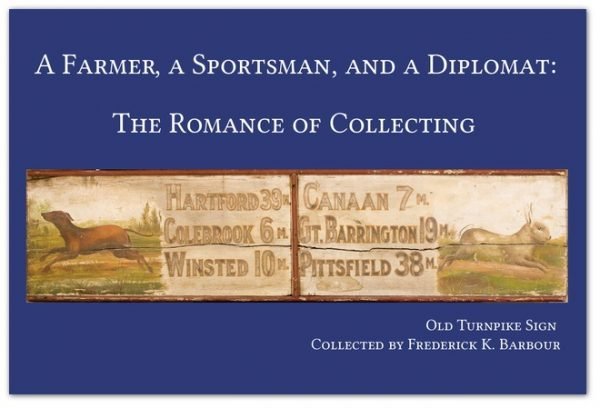 The exhibition A Farmer, a Sportsman, and a Diplomat: The Romance of Collecting in Norfolk is on view from June 6 to October 11. It features three very different but equally compelling collections associated with Norfolk residents and housed at the Norfolk Historical Museum: a group of patriotic-themed shelf clocks dating from the 1830s collected by a local dairy farmer; a selection of pieces from the collection of Frederick K. Barbour, eminent collector of Connecticut 18th century furniture and Norfolk sporting enthusiast; and a group of seventeen hand-painted and embroidered 19th century Chinese rigid pien mien fans acquired by Norfolk summer resident Professor Frank J. Goodnow. In addition to collecting objects, several Norfolk residents, including Frederick Barbour, “collected” colonial houses, dismantling and relocating them to Norfolk in the 1930s. These are part of a special “houses on the move” section in the exhibition.

Norfolk farmer Austin Wooster was one of many Americans who traveled to Philadelphia for the Centennial Exhibition. This may have peaked his interest in American objects and designs. Wooster collected early 19th-century shelf clocks with reverse-painted patriotic motifs including portraits of George Washington and Thomas Jefferson. The clocks were all made within a very small radius of Norfolk, as the area was the center of clock-making in the period. The exhibition features a selection of the Wooster clocks as well as other collections belonging to the Wooster family, including period postcards.

Like many summer visitors in the early 20th century, Frederick K. Barbour came to Norfolk initially for its superb hunting and fishing opportunities. He relocated a colonial farmhouse to Norfolk and filled it with his collection of early Connecticut furniture. Barbour was one of the first to appreciate the craftsmanship of 18th century furniture made in the state, and he eventually donated most of his finest pieces to the Connecticut Historical Society where they are housed today. Several Barbour pieces are in the collection of the Norfolk Historical Society and are displayed, along with objects of particular significance to the town, such as the hand-painted road signs made by WPA artists, which Barbour rescued long after they had been removed from the town green.

Summer residents Frank J. Goodnow and his wife were renowned collectors of Asian art and objects, many of which were gifted to the Baltimore Museum of Art. Dr. Goodnow was an expert in administrative law and public administration and legal advisor to the Government of the Chinese Republic from 1913 to 1914. The Goodnow collection of fans is one of the highlights of the Norfolk Historical Society’s textile collection and reflects one aspect of collecting in Norfolk: sophisticated, worldly, and wide-ranging. The fans demonstrate extraordinary Chinese craftsmanship in embroidery and painting on silk. The Goodnows’ son-in-law American diplomat John V. A. MacMurray collected images of China with his camera lens, taking over 1,600 photographs of rural scenes while he was secretary to the American Legation in Peking (1913-1917).

The rear gallery features a “Houses on the Move” narrative with blueprints and photographs of several colonial houses that were dismantled and removed to Norfolk in the 1930’s as part of the Colonial Revival. These include the Rose Terry Cook house, home of the Winsted poetess, and Spite House, built in Hebron, CT, to spite a neighbor by blocking his sunlight.