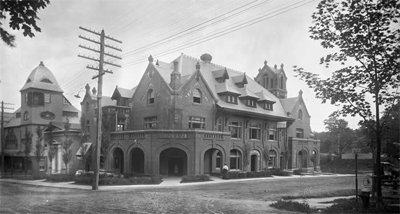 A Photographer in the Northwest Hills: Frank DeMars & Postcards of Norfolk 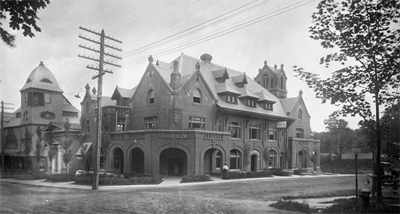 When Peg Giles inherited her grandfather’s photographic equipment, she realized she had a treasure trove of some 5,000 images on glass plate negatives, many of which had never been seen before.

This summer the Norfolk Historical Museum brings many of these unseen images of Norfolk and surrounding towns back to life in an exhibition of the postcards of Frank DeMars (1872-1942). DeMars was the proprietor of The Art Store in Winsted, a framing shop that opened in 1904 where he sold postcard images of the photographs he had taken. He traveled extensively around the northwest corner of Connecticut, and his photographs include many scenes of Norfolk and neighboring villages: houses, stores, streets, landscapes, farms, and people engaged in various activities. DeMars also made postcards using images taken by other photographers such as Marie Kendall and King T. Sheldon. Of special interest are photographs of the railroad as it passed through Norfolk. It is hard to imagine tracks crossing underneath Route 44 by the Norfolk Library, or that there was a railroad overpass just south of the Village Green, but the railroad was part of the Norfolk landscape, and DeMars’ postcards reveal just how the tracks impacted the town. Displayed along with the original postcards are large-format copy prints taken directly from the glass-plate negatives, resulting in images of extraordinary clarity and detail in which visitors will rediscover familiar places in their early-twentieth century guise.