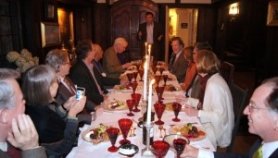 Warmly aglow, fending off a frigid February Norfolk night at the top of a hill on Litchfield Road, Alfredo Taylor’s magnificent Moss Hill which he designed and built for his mother-in-law in 1903 was a welcoming sight to a score of Norfolk denizens arriving at the formidable residence for an evening of history and fine dining.

The third in a series of elegant, intimate dinner parties given by, and for the benefit of, the Norfolk Historical Society under the rubric, The Ladies of Litchfield Road, the February 16th soiree at Moss Hill was the culmination of the Historical Society’s winter programming. All three Taylor-designed homes were commissioned by prominent women who were part of the summer colony that thrived in Norfolk in the early years of the 20th century.

The first two dinners were staged on the west side of Litchfield Road: at Helen Hartley Jenkins’ Bungalow (pictured above), now owned by Arden Mason; and at Miss Elizabeth Farnam’s Fernwood, now owned by Roger Mitchell and Pete Peterson. After period cocktails and hors d’oeuvres in settings reminiscent of the Gilded Age, Ann Havemeyer, curator of the Norfolk Historical Society, delighted the guests with a witty and informative slide show on the architecture of the houses and the lives of the people who have lived in them through the years. Wonderful, themed dinners followed in evocative rooms redolent with the hallmarks of Taylor’s design philosophy.

At Moss Hill, many of the guests wore vintage clothing that would not have been out of place on the set of Downton Abbey. Cook’s Champagne, a popular vintage when the manse was built in 1903, was served, along with hors d’oeuvres true to the house’s pedigree in front of a roaring fire in the marble fireplace of the grand salon. Once again, Ann Havemeyer gave a fascinating slide show on the architecture of the house and the dynamic between Alfredo Taylor and his mother-in-law, Minnie Fassitt, who built Moss Hill with the second of her three husbands.

Dinner was served under crystal chandeliers in two wood-paneled rooms at three round tables bedecked with beautiful arrangements of roses and circles of very tall, thin candles. A large, antique mahogany table in the formal dining room was laden with a scrumptious, delicious meal, expertly prepared by the night’s hostess and owner of the house, Jennie Brown. Guests feasted on delicacies gleaned from recipes that may well have been served at dinner parties when the house was built: lump crab cakes, haricot vert, layered potato gratin, mini pea timbale and filet mignon with mushroom sauce.

Few people in this modern age are able to live in the elegance and style of bygone eras, except vicariously through motion pictures and television; but thanks to the community involvement and spirit of certain generous homeowners and through the aegis of the Norfolk Historical Society, we can just pretend for an evening, and be magically transported back to what in retrospect may seem to have been… better times.

Stay tuned for upcoming historic house dinners which will focus on and try to recreate how people in Norfolk lived their lives in various generations over the last two hundred and fifty five years.